Dermal biopsy is the process in which a histopathological Sample is taken to help diagnose and further manage a potential problem. The procedure can provide treatment as well as diagnosis for many lesions. The biopsy can also be used for immunofluorescence and crops (e.g., Mycobacterium, lesamaniasis).
Removal of the moles can be done either by excision or shaving.

A basic prerequisite for positive results is the clinical experience of the dermatologist for both the sampling and the distinction of possible lesions and the recording of the patient’s history. The sample is then analyzed by a histopathologist to determine the problem.

Moles-nevi, are removed for various reasons and can be removed by two surgical methods:

Although laser ablation has been tested for moles, it is not the method of choice for those that have more depth as the laser beam of light does not penetrate deep enough, and there is no tissue left for a laboratory exam.

Typically, the plastic surgeon may choose excision with or without sutures, depending on the depth of the mole.

How are skin moles developed?

Some people are born with moles while in other cases they appear in the course of life.

The role of heredity cannot be underestimated. Many families have a type of mole known as dysplastic or atypical, which seems to increase the likelihood of development of a melanoma.

The clinical examination is recommended once a year to people with the presence of moles on their body as well as the mapping of moles and it is generally recommended to avoid sun exposure.

There is no case of side effect from removing a mole. On the contrary, in many cases the removal of a mole can be a lifesaver.

Mapping moles is a diagnostic technique of digital recording of moles which is performed by the dermatologist. Through te historical data created we can detect changes on the shape of the moles and take actions proactively when necessary.

The changes relate to the assymetry, the boundaries, the color, the diameter and the elevation.

Differences between normal stains and melanoma 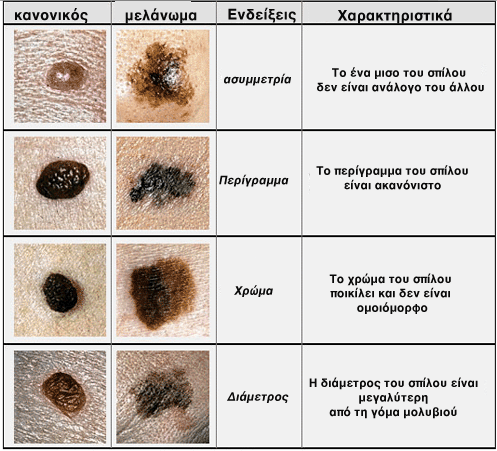 The papillomas are benign skin tumors, they usually have the color of the skin while in many cases resemble the moles. They appear in different parts of the body but mainly on the face, especially on the eyelids and neck.

There are many factors for their appearance such as body weight changes, hormonal factors, heredity etc.

The removal at dermacen is performed with diathermy or liquid nitrogen and the procedure is fast and relatively painless.

Moles removal from €150 with biopsy

Moles removal from €100 without biopsy

The biopsy results are delivered within 7-10 working days